Symbol and pride of the Catalan Pyrenees, the yellow train offers an exceptional view of the Têt valley and the Cerdanya plain.

The Yellow Train, also called the Canary because of its colour, links Villefranche-de-Conflent (427 metres) to Latour-de-Carol (1,232 metres) over a 63 km route and climbs 1200 metres of gradient up to the Bolquère station, the highest in France at 1,593 metres. From one end of the line to the other, it takes 3 hours during which you will have plenty of time to photograph the landscape of the Têt valley and the Cerdan plateau.

Built at the beginning of the century, the mission of the Yellow Train railway line was to link the Catalan high plateaus to the rest of the department. The first works undertaken in 1903 made it possible, from 1910, to link Villefranche-de-Conflent to Mont-Louis. The final line was not completed until 1927 when it reached Latour-de-Carol.

It currently retains its original layout in an environment allowing for magnificent mountain scenery. The construction of this track thus required the building of 650 engineering structures, including 19 tunnels and two remarkable bridges: the Viaduc Séjourné (suspended 65 m above the ground) and the Pont Gisclard (80 m above a precipice), to allow the Yellow Train of the Pyrenees to play with the relief.

The line operates all year round while the little yellow train serves 22 stations. During the summer season, the yellow train also allows you to make this superb journey in an open wagon… and embark on a fascinating journey through the Pyrenees! From station to station, a whole heritage to be discovered.

All along its journey it passes through 19 tunnels (337m long Planes tunnel, Pla de Llaura 380m long not far from Ur) and multiple bridges. 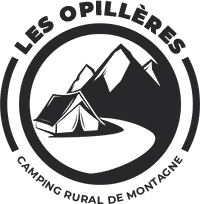 The rural campsite Les Opillères, in Saint-Pierre-Dels-Forcats in the Pyrénées-Orientales. A South of France destination down the Cambre d’Aze mountain, in the heart of the Catalan Pyrenees Natural Park. Crossroads of many hiking trails, including the GR10 and the Catalan Way to Santiago de Compostela. The campsite is also your base for bike rides, to explore the citadel of Mont-Louis, to discover the landscapes of the Conflent and Cerdanya with the Yellow Train…